A Tooth on the Looth!

A Tooth on the Looth! is the 8th episode from Season 2.

This episode won an Annie Award for "Best Animated Preschool TV Production" at the 2013 Annie Awards!

The opening begins as Molly greets the audience, about to announce the show when she hears

Gil trying to say it also. But he's all gurgly due to the toothpaste in his mouth! He then spits it out and says, "It's time for Bubble Guppies!"

The episode begins as Molly and Deema had to school, just as they hear someone talking to a young lobster boy. They spy on the dentist and Deema begins to ask what the dentist is doing. Deema questions this, and Molly explains what a dentist does before asking. He answers, then Deema mentions she has to show him her tooth. Molly asks why, to which Deema shows her it's loose!

And so, the girls go to visit the dentist really quick and Deema panics when the Dentist tells her it'll fall out, but later gets excited when she finds out a grown-up tooth will grow in its place. She then quickly swims away... only to remember Molly and swim back suddenly...

Both girls resume heading to school right afterwards and they begin to discuss brushing teeth, and what color toothbrush they use. Mr. Grouper then explains tools used when taking care of teeth. Like a toothbrush, toothpaste, and then dental floss. He then asks what a doctor who takes care of your teeth is called. Molly then begins to sing, "Just Smile!"

Goby then decides he's going to be a dentist and goes into his dentist office. He asks the viewers for help and they begin. Showing some teeth on the wall, Goby notes how different the two rows of teeth look and how they need to match the three different pairs of teeth. He reveals the first teeth set belong to a dinosaur, while the second belongs to a Hippo! One more smile to go!

The final teeth belong to Mr. Grouper! Who announces it's now time for lunch... 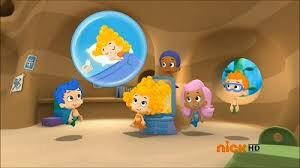 Molly explains how important taking care of your teeth are when Gil tries to show her the electric toothbrush he purchased. It then gets loose and runs away! And so Gil chases after it as Goby tells Molly to come play with them in class.

In class, Nonny is pretending to be a dentist and tells the Gorilla plush doll to come back in a while for another visit. Then Goby holds up an alligator sock puppet, which scares Molly and Nonny! As Deema keeps playing with her tooth it's then Oona shows up as the tooth fairy and they begin to explain what the tooth fairy does, and who she is. It's then time to go outside!

Once upon a time, two swamp dentists were working one day trying to spot some animals to check

out and make sure they were healthy. As they go through the swamp, Gil asks about the possibility of alligators being in the swamp but they soon notice a gloomy looking frog and go to see it. They put the frog in their dental chair and give him a checkup. Gil comments how it's lacking teeth, and they apologize since it won't need a dentist...

Suddenly an alligator appears and they flee! Soon, Molly and Gil come by a bird. Molly suggests that maybe the snowy egret will need a checkup but when they go to look, they notice it's lacking teeth too! Nonny momentarily interrupts to point out that birds lack teeth and they resume trying to find a patient. Seeing the Gator once more they quickly leave!

Eventually cornered by the alligator, and then falling from their hiding spot in a tree. Molly asks the alligator when he last brushed his teeth, considering his smelly breath. Molly then makes him promise not to eat them if they show him how to brush his teeth. All of the items have spilled though, so Molly asks the little fish/audience for help finding the right items they need to brush the alligators teeth. And so, both Molly and Gil quickly brush their teeth and watch the alligator.

Nonny then points out that you can also brush your tongue as Molly and Gil tell the Alligator to keep brushing his teeth. the story slowly comes to an end and Deema begins to sing the Dance Song, "Brush Those Teeth!"

They then come to the examination room and everyone takes turns getting their teeth examined. The dentist mentions that her tooth will fall out soon and begins to look at Mr. Grouper's teeth, along with the Guppies. He then shows him the cool Dentist Toothbrush as Deema keeps playing with her tooth. Eventually it pops right out! Deema has an imagination spot as everybody begins to sing together on a stage. The dentist gives her a grand entrance, and she elegantly swims to a bed, and sleeps. Afterwards, Oona comes dressed as the tooth fairy, and flies down to the bed, and takes her tooth. She then replaces it with a coin. Finally Deema wakes up, and notices her tooth is gone, and she has a coin.

Molly speaks once more as Gil then claims he doesn't need the electric toothbrush anymore. Since he got a nice little bag from the dentist, full of items he could use. Suddenly the electric toothbrush sneaks up and Gil tackles it! He grabs it and tries to control it but it ends up over-powering him and foaming up his entire mouth! Molly then giggles as Gil shows his shiny teeth to the camera!