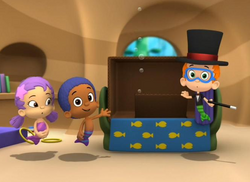 When Daisy the Magician pulls a rabbit out of her hat, it is obvious that the rabbit has no feet on its lower body.

Retrieved from "https://bubbleguppies.fandom.com/wiki/Bubble-Cadabra!/References?oldid=132902"
Community content is available under CC-BY-SA unless otherwise noted.