Gil is an energetic male guppy and a turbo charged boy - if he sees a ball, he has to 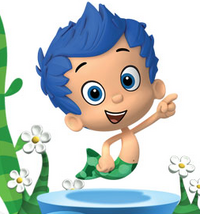 throw it; if he finds an electric guitar, he has to play it; if there's a pig costume around, you can be sure he'll be oinking in no time; if he sees a truck, he'll being trucking in no time. He is also kind, helpful and a really good friend. Gil is one of the co-hosts of the show, as well as one of the two main protagonists, the others being Molly. Gil is Goby's best friend. Gil's upbeat energy and insatiable curiosity is infectious, so he's great at encouraging others to join in his adventures. You can be sure he'll deliver some friendly slapstick humor along the way. He is often the subject of a continuing joke that repeats during the episodes. Gil's favourite colour is purple, as seen in the episode: The Crayon Prix!. Along side of Molly and Deema, he is the only character to sing the pop songs. His favorite food is pizza and apple juice as seen in Happy Clam Day!

Gil is the silly leader of the Bubble Guppies along with Molly. He is messy; he's always been struck by lightning or just getting bad luck. Gil's very silly when it comes to the sketches before the guppies are shown playing or talking after lunch. He's always being chased by animals, objects and even planets! Gil is a (usually) brave, not very cautious male guppy, he never over thinks anything, he just goes with it. He also loves to play music, including singing and dancing. He tends not to do so well under pressure, as seen in the Mr. Grumpfish Special!. He sometimes also gets startled very easily.

Gil's social skills is apprentice-leveled. He's good at speaking. Gil's age could be from 5-7. Gil uses low vocabulary when speaking to the viewers.

Gil has peach skin, cow-licked cerulean blue hair, and blue eyes. He has a medium, pale, and forest green camouflage patterned tail. He usually doesn't wear tops. In Good Hair Day, his hair is too long, so Miss Jenny cuts it just the way he likes it.

Molly and Gil are the best and close of friends and they are always seen next to each other. They're both the main characters and protagonists of the series as well as the show's co-hosts. There are hints that he may have a crush on her as for the two of them hug each other a lot and Gil often tries to make her laugh. In the end of Good Hair Day, she compliments him that she likes his haircut and he thanks her. She may return his feelings as she often calls him 'Gilly'.

Goby and Gil are best friends. They always play together and they'll never leave each other's side! They are both right-handed and they have the same interest. Goby sees Gil as a brother and best friend. These best friends have a couple of story segments together, and they often walk to school together. They both love rock and roll as well.

Gil and Deema are both great singers and great dancers. They look similar, for example they are the only guppies with blue eyes, and they have almost the same personality. In the episode Call a Clambulance! they are seen holding hands, but in fear.

Gil and Oona are close friends. They are interested in the same things. They love to play around and sometimes tease each other. In Can You Dig It?, throughout the episode, Oona was tricking Gil into thinking there was a real dinosaur until the end of the episode when he realized it was her. These two good friends also do a few story segments together.

Nonny and Gil are very good friends despite their different personalities. Gil is nice to Nonny and helps him out like in Fishketball when he helps Nonny catch the ball. Gil has been shown to respect Nonny's intelligence.

They met in The New Guppy. Barely anything is known about the relationship. However, they high-fived in Genie in a Bubble!.

Gil is the owner of Bubble Puppy. Bubble Puppy is Gil's pet puppy and best friend. Gil adopted him at the animal shelter in the episode of the same name. Sometimes Bubble Puppy causes some of Gil's misfortunes. But Gil has never been angry with his puppy anyway. Whenever his pup is in danger, Gil won't hesitate to rescue Bubble Puppy, no matter what trouble he is in.

The Little Fish are an often annoyance of Gil, but they maintain a good relationship anyway. Usually they cause some of Gil's misfortunes.

Gil is good at singing, dancing, and could possibly be a comedian someday, due to his goofy personality.

Gil's singing voice has gone higher since Season 1. He is fond of singing long and high notes. This is because his voice actor has changed. In Season 1, he'll normally just sing a few notes at a time. He has done many dance songs and pop songs in Season 2, more than in Season 1.

Gil's dancing is very advanced. He has been a background dancer in many episodes, songs and field trips. Gil has done many dances in season 1, 2 and 3.

Gil's musical ability is similar to the other guppies. He plays in a professional way, as if he had mastered an instrument overnight. He has mastered the 3 primary instruments

common to the Bubble Guppies series: vocals (see "Singing" article), guitar, and drums. Gil has played both kinds of guitars only in Season 1 (acoustic in Who's Gonna Play The Big Bad Wolf" and electric in We Totally Rock). Gil has played the drums only twice: At the concert in We Totally Rock!, and in the Big Warm Friendly Smile pop song from the episode A Tooth on the Looth, and. In later episodes, such as Only the Sphinx Nose! and Bubble Duckies!, he goes back to playing electric guitar during the pop song segments. 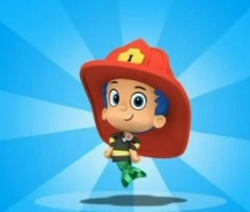 Gil has appeared in every episode but his Main Character appearances are: