Goby is a creative male guppy with a vivid, offbeat imagination. He loves to put on costumes, tell stories, and speak in silly voices. Goby does not keep his imagination to himself, instead he uses it to invent exciting outdoor adventure stories for his friends to act out. Goby loves to bring his friends together for some adventurous imaginative play both in the classroom and on the playground. He likes to eat turkey sandwiches and cran-apple juice and he also likes to wear baseball caps. He is best friends with Gil. Along with Deema, he sings few of the dance songs, however none in season 3.

Goby has many hidden personalities. He is outgoing, creative, smart and has all sorts of wonderful traits. Goby loves animals. He wants a pet dragon as revealed in Bubble Puppy! Goby loves to talk and pretend to be people he is not. He is the perfect guppy to act withrangely.

Goby's social skills are very high for his age, and like Molly, his age cannot be verified. Goby doesn't talk that often in the show, not as much as Gil

Goby's relationship with Molly is a friendly relationship, although they do not interract much in the show. However, they do care for each other, and have some story segments with each other.

Deema and Goby are good friends. They love to play, hang out, or just be together and have been together in some shop segments. In the shop segment of The Cowgirl Parade, Deema made an expression towards Goby that may implies that she has feelings for him. There are other possible hints but it is not confirmed whether they are intentional or not.

Goby has a good and close friendship with Oona for they can be seen dancing in many pop songs. But their relationship seem to have gotten much closer in season two, specifically in the episode "Bubble-Cadabra!" when Oona was worried after Goby disappeared. After finding him, she hugged him, telling him she was glad he wasn't gone. Also, in "Triple-Train-Track Race!" when they can be seen high-tailing each other.

Goby and Nonny aren't as close as some of the other guppies, but they are still good friends. They talk about their skills and share interests. They are both right handed in writing, unlike Molly. In the season three they are closer than in the other seasons. In The Amusement Parking Lot!, they share a car.

Goby's skills as a dancer are very active. He dances with Gil and in some pop songs. Goby is normally put as a background dancer in many songs.

Goby is very good at music. He loves to play his guitar. Goby's music skills brings up his creativity. Goby's guitar skills could be seen in the pop song Build Me a Building!, We Totally Rock, and Brave, Brave Knights. 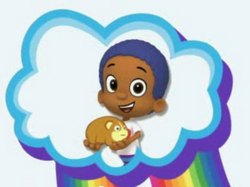 Goby has Appeared in every episode but his Main Character appearances are: