Molly is a musical female guppy and a natural-born leader. She is kind, friendly, helpful, and a really good friend. Molly is one of the two co-hosts of the show, as well as one the two main protagonists, the others being Gil. Due to her bubbly personality, every guppy (especially Gil) wants to swim with her. She always makes it a point to turn to the camera and talk to the audience directly, ensuring that they stay at the center of all the action. Molly sings nearly all the pop songs with her blue fish microphone (changed to yellow), while the other guppies sing backup. Molly considers Gil as her best friend. She's good friends with all the guppies, Bubble Puppy, Gil (her closest friend), Goby, Deema, Oona, Nonny, Zooli, and Mr. Grouper. In Bubble Baby!, Molly welcomes her new baby sister, Mia. In A Dolphin is a Guppy's Best Friend!, She gives a hug to Buddy. In Guppy Style! (Part 2), she sings with the world-famous pop star, Stylee.

Molly is the bubbly leader of the Bubble Guppies along with Gil. From the second season on, she's first at lining up to go outside, Goby being the first in line in season 1. She's the lead singer in almost all the songs. Despite receiving more attention than anyone else (excluding Gil who gets as much attention as she does), Molly is not a selfish guppy, and she normally thinks about others before herself.

Molly can get annoyed with Gil sometimes, but never seems to get upset with him. She usually smiles, and helps him out of the trouble he put himself in, yet she doesn't shout at him. Sometimes Molly will get an object to prevent Gil from making any more noise. Such as in We Totally Rock!, Gil kept playing his guitar out loud and prevented Molly from saying "It's time for Bubble Guppies!", so she got some amplifiers and played a loud guitar chord through them. It blew Gil away, causing him to listen to her.

Molly has many skills. She has an interest in reading as seen in the pop song: We're Gonna Fly when she was reading the book Mother Goose, referred to in the song as her favorite book.

Molly has a strong singing voice. It can be heard throughout the ocean. She sings almost every pop song in the show. Sometimes Gil sings a pop song while she sings backup and/or in a Dance song. This happened in pop songs such as Our Great Play, I Need to Rock!, and X Marks the Spot!.

Molly always has a blue fish tail-shaped microphone whenever she's singing. It has been seen in almost all of the pop songs, but in The Restaurant, her microphone was seen in the first verse, and disappeared throughout the chorus, and then came back in the last verse.

Molly dances in nearly every pop song and has danced in a few dance songs. Molly was seen in Abra-Cadabra dancing with Deema. Gil was the one who was singing the pop song. In Is There A Job I Can Do For You, Molly was singing and dancing along with the other guppies.

Molly has had some musical experience, similar to the other guppies. The only musical instrument she has ever played in the series, besides her vocals, was the acoustic (The Spring Chicken is Coming!) and electric guitar (Sir Nonny The Nice!, We Totally Rock!). Also, she played piano in And I Would Fly.

Molly is the type of guppy who reacts really quickly. She can dodge fast objects that are coming at her. She can pull people out of the way. In other episodes like Fishketball! She quickly ducked out of the way when she almost got hit with a meatball, and in Come to Your Senses!, she quickly caught the ball when it bounced too high. Molly is very agile.

Molly is really sporty as seen in the episode Fishketball! She is good at shooting hoops and throwing the ball. She is also able to catch balls with her left hand very well. Sometimes Molly is right-handed at throwing. Another example of Molly's athletic ability is shown in The Glitter Games!, in which she kept up with Demanda throughout all of the physical challenges, despite not being as prepared.

Molly has light brown skin, long bright pink hair and brown eyes. She has a blue tail with swirling light blue and dark blue patterns on it, and her bikini top matches her tail.

Out of all the Guppies, the real true best friend of Molly is Gil, who is also her co-host. The two are the best than any of the other guppies and they both sing the most pop songs. Molly cares about Gil and is the only bubble guppy to call him "Gilly". She has hugged him lots of times and she often gives him compliments. In The Super Ballet Bowl, she played the princess and Gil played the Prince, and he caught her when she jumped. Molly and Gil are the main characters and protagonists, and they are shown throughout every episode.

Deema and Molly are good friends. They enjoy playing together, and they love to play with their toys. They also like to play sports together. They would often sing together in some songs, and do duets in dance numbers. Plus they do some story segments such as the one in The Oyster Bunny!.

Molly and Goby treat each other as brother and sister. They enjoy playing together, sharing intelligence and they both love playing music. These two friends have also had a few story segments together.

Molly's relationship with Nonny isn't well known. She hardly ever pays attention to him. But Molly and Nonny do get along. These two held hands once in the song Spooky!, and they did a dancing duet. And she also respects Nonny’s intelligence.

Molly and Oona are great friends; they love to play games and they love to care for each other's possessions. Molly and Oona don't talk that often but they always think about others. After Molly rescued Dusty's horse in The Cowgirl Parade! Oona gave her a hug. It isn't very noticeable though.

Molly and Zooli met on The New Guppy. At first, Molly was unclear and concerned about how Zooli was 'helping' the Sea Witch. However, Molly was pleased to find out Zooli just had a plan the whole time and thanked her. Molly and Zooli could often be seen interacting like in Swinging in the Rainforest! where she provides Zooli with an umbrella hat after they talked about Zooli's struggles when it rains.

Mr. Grouper is a teacher.

Buddy is a dolphin. They met on A Dolphin is a Guppy's Best Friend!

Mia is Molly's baby sister. They met on Bubble Baby! when Molly and the guppies go and visit. Mia loves the sound of her voice, she's always giggling when she talks and calms down when Molly sings to her.

Stylee is a world-famous pop star. She encouraged Stylee to be herself with her audience. They met on Guppy Style! (Part 2) 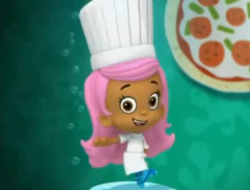 Molly has appeared in every episode but as the main character, she appeared in: