In the early Bubble Guppies pilot, Molly had a similar design to her present design. Her skin color, hair color and all her features are the same as the one now. Except that her hair was a little more straight than curly.

In the first season, Molly's flyaway hair was longer, thicker and deep pink instead of light orchid pink. Her tail was skinnier and she was taller in length. 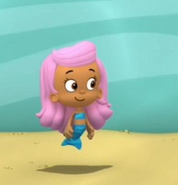 Add a photo to this gallery

In season three of Bubble Guppies, Molly's voice has become softer. Her fish microphone is now colored gold and blue. Her hair is a bit lighter as well.

Retrieved from "https://bubbleguppies.fandom.com/wiki/Molly/Development?oldid=135565"
Community content is available under CC-BY-SA unless otherwise noted.