Nonny is a brainy, cautious, and overly calm male guppy. He's more likely to comment on the action than get swept up in it, and he often uses an advanced vocabulary for his age. Nonny cares about his good friends, but the one he cares about the most is his best friend Oona. Physical activities make Nonny a little unsure of himself, as he'd rather define "basketball". 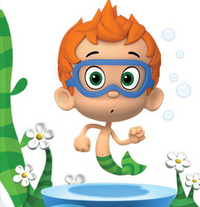 His willingness to keep trying, combined with encouragement from his friends, often leads him to triumph in the end. Nonny loves to read books, and has been seen doing this in several episodes. His nickname is Nonners, although nobody calls him that but Deema.

Nonny has peach skin, carrot orange hair, and green eyes. He wears cerulean blue glasses, which resemble scuba goggles. His tail is light green with dark green stripes. His ears are slightly larger than the other guppies'. He is thinner than them as well. Because of his thin stature, it gives him the illusion of having unusually large hands.

Nonny saying his name in the theme song.

Nonny doesn't sing that often, but a solo in the episode, "Can You Dig It?" titled He Found It, and a full solo in "The Puppy And The Ring", titled "Cavern Realm Song".

Nonny has been shown playing instruments in multiple songs. For example, in "Puppy Love!", he was shown playing a tamborine, and in "The Puppy And The Ring", he played the guitar and piano.

Nonny has been shown to be a background dancer in many episodes, however his dance skills have been shown to not be as good as the others. An example of this is in "The Wizard of Oz-tralia!", when he was dancing with the others to the Dingo song. Nonny was also seen doing the robot in the song Check It Out!

The relationship between these two is currently unknown, but it is believed that the two are friends. In Spooky, the two had danced together.

Nonny's friendship with Gil is pretty normal; they are really good friends. In the episode Fishketball!, Gil helped Nonny learn how to catch a ball and at the end of the game, he then thanked him for his help.

Nonny seems to be close to Deema. She often calls him "Nonners" and they dance next to one another on many occasions. Deema put sunscreen on his back for him during the song, "At The Beach."

Oona and Nonny seem to have a strong friendship with each other. The two of them are the quietest of the Guppies and they mainly sing back-up. Whenever Oona asks a question, he will answer it.

Despite the fact that they don't hang out as much, Goby considers Nonny as his friend. The two love to narrate the stories their friends play in during recess, and have even acted in a story together in The Amusement Parking Lot! and "Fruit Camp!".

TBA, She is a new character, so Nonny and Zooli are not very close friends.

Nonny has appeared in every episode but his main appearances are: