Bubble Guppies Wiki
Register
Don't have an account?
Sign In
Advertisement
in: Episodes who have Molly as a Main Character, Episodes that Gil is the Main Character, Season 2 Episodes,
and 8 more

Only the Sphinx Nose!

Only the Sphinx Nose! is the 15th episode of Season 2.

Gil and Molly come across a museum holding a special exhibit on the Sphinx, and they ask the curator what happened to the Sphinx's nose. But he says nobody knows what happened, so Gil, Molly and the rest of the Guppies and Mr. Grouper try to solve the mystery while learning all about Egypt.

Molly and Gil are on their way to school, then they see an opening of a museum exhibit on anicent Egypt. They 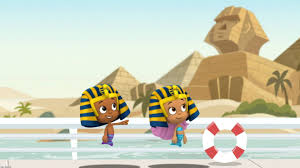 then notice that the Sphinx's nose is missing. They talk about that to the curator of the museum and he says that no one knows why the Sphinx has no nose. Molly and Gil then proceed to school telling everyone about it.
Community content is available under CC-BY-SA unless otherwise noted.
Advertisement