Oona is a polite and sincere girl who's emphatic and willing to listen at all times. Her best friend is Nonny, and they frequently play together. When not around Nonny, Oona usually hangs out with Deema.

Oona finds limitless wonder in the world around her, normally being the guppy to ask Mr. Grouper a question and always being excited to learn the answer.

Depiction in the Series

Oona has almost gotten angry at least once in season 5. She is also kind to all the guppies. Oona is kind to Molly, Gil, Goby, Deema and Nonny. She's also eco-friendly, like in Boy Meets Squirrel!, she asked Mr. Grouper what she should do with the paper. She decided to not throw it away, but to recycle it.

Oona's personality is seen to be shy. She loves to play with the other guppies, she is never afraid of asking questions, and is always happy to learn the answer. In Bubble-Cadabra! She was seen very worried because she thought that Goby had disappeared until after he re-appeared. Oona quickly hugged him, happy that he didn't actually disappear.

In Call a Clambulance! Oona was worried about her fish friend named Avi, who broke his tail while riding his tricycle and Oona got worried that he might be hurt and might not swim ever again.

In The Spring Chicken is Coming, she was upset because her flower didn't bloom before the ceremony. She taught the viewers that patience is the best way for happiness. The Spring Chicken wouldn't announce that it's spring unless she saw a flower. Oona remembers that her flower was behind the bench and then it bloomed right on time; making it spring!

Oona has light tan skin and brown eyes. She has amethyst purple hair that is worn in low pigtails with pink ties. She wears a pink star-shaped accessory in her hair. She has a purple tail with wavy pink stripes. Her body is slightly thicker than the other guppies. She is the only guppy to have almond shaped eyes, along with Zooli. At first glance, Oona's skin looks white, but when compared to Deema and Nonny, her skin looks quite yellow. Oona is the most different out of the girls. She wears her hair in pigtails, while Molly and Deema wear their hair without accessories. She also appears to be wearing a one-piece suit, unlike the other two girls, and her eyes are almond-shaped.

Oona's singing voice is very good. In season 1, Oona's voice wasn't really heard, and she normally just said her lines rather than singing them. Oona has a high pitched voice which is good for singing solos. Since she's not one of the major characters, she's usually in the background. Oona sang a solo in Call a Clambulance! (See: A bunch of bones). Oona also had a short solo when she was singing The Flutter Guppies Realm Song.

Oona can dance very well, which is why she's put in several dance songs. She also doesn't seem to dance that often when she's on her own. She usually dances with Deema. Oona follows dance steps (normally what Deema does) as seen in the dance song Stick Out Your Wings and Fly.

Oona's musical ability is outstanding, like her friends. She seems to play in a professional manner like all the other guppies as well. In Big Warm Friendly Smile, she played guitar for the first time on the show. She plays the drums in numerous pop songs during Season 2 such as At the Zoo, Once Upon a Time, Brave, Brave Knights, Nobody Nose! and And I Would Fly. She even played the tambourine in We Totally Rock!
1/13

Molly and Oona have a very good friendship. They hang out together, play together and help one another. You would usually find these two friends drawing, or playing together. Most of the time, Oona would call Molly over to play with her.

When Oona's not hanging out with Nonny, she usually hangs out with Deema, for they are very close friends. The two guppies have a very good bond despite their different personalities. Oona is usually Deema customer in the shop segments, and vice versa. These friends both love baby animals as seen in many episodes such as Bubble Puppy!, The Oyster Bunny!, and A Dolphin is a Guppy's Best Friend!, Deema and Oona have also opened a restaurant together in The Grumpfish Special!

Goby and Oona have a close bond. The two are often seen together in field trips, during class and in story segments. In the episode Bubble-Cadabra, when Nonny made Goby "disappear" Oona was worried about where he went. After she found out he didn't really disappear, she was happy and gave Goby a hug.

Not much about Gil and Oona's bond is heard, but they are good friends and they played the story segments of the two dinosaur police-officers in Can You Dig It? and The Police Cop-etition!, and a third in Super Shrimptennial Celebration! In Can You Dig It? she tricked Gil into believing that a real live dinosaur was hiding somewhere. In The Glitter Games! Oona pretended to be a unicorn for Gil. They also shared a story segment in that episode. Nonetheless, they are great friends and often dance, color and help out one another when in need.

Nonny is one of Oona's good friend's. They have a good relationship and are often seen together. When Oona usually ask a question, Nonny is the usually the one to answer her. These two friends usually have similar lunches most of the time.

Although Avi only appeared in two episodes, his friendship with Oona seems to be very strong. She is very caring about him; especially when he fell off his tricycle or when it was his first day of school. She has hugged him twice. 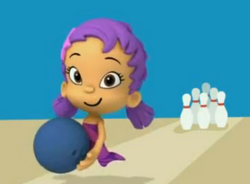 The Gallery For Oona can be Seen Here