Bubble Guppies Wiki
Register
Don't have an account?
Sign In
Advertisement
in: Candidates for deletion, Minor Characters, Fish,
and 2 more

This page is going to be deleted! The reason is No reason given

If you disagree with its deletion, please explain why at Category talk:Candidates for deletion or improve the page and remove the {{delete}} tag or tell one of our admins or one of our content moderators.

Remember to check what links here and the page history before deleting the page.

The Pink Colour Fish is a pink fish who only appeared in the episodes: The Crayon Prix! and Fishketball!. He has the ability to blow bubbles from his tube-shaped mouth. He can even blow different coloured bubbles.

In The Crayon Prix!, he only appeared in the Molly and Gil sketches; the first and the last one. In the first one, Gil wanted him to blow an orange bubble but he keeps on blowing other colours. When he blew a red bubble and a yellow bubble, Molly showed Gil that they can make orange by blowing the yellow bubble into the red one, making an orange bubble. The orange bubble pops and covers Gil. In the end sketch, he blew a huge purple bubble which pops, covering Gil and The Viewer with purple. In Fishketball!, he only appeared once when Gil was going to school. He was blowing a few more bubbles for some Little Fish to play volley bubble. He then blew a bubble for Gil to show his friends.

Pink colour fish looks very pale pink. He has a strange tube-like mouth which he uses to blow bubbles with. His right eye is bigger than his left. Other than that he looks like an ordinary fish. 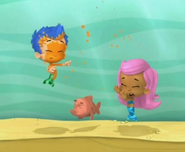