Bubble Guppies Wiki
Register
Don't have an account?
Sign In
Advertisement
in: Episodes, Season 3 Episodes, Episodes that Gil is the Main Character,
and 10 more

Puppy Love! is the 7th episode from Season 3 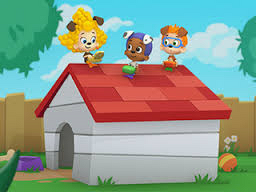 A veterinarian takes care of Bubble Puppy when he is sick. While they wait, the Guppies learn more about dogs.

The episode starts with Molly greeting the audience and hears Gil telling Bubble Puppy to say "Ah!" Molly goes over and sees Gil is pretending to be doggy doctor, or a veterinarian. He checks Bubble Puppy's tail and love stoned to his heartbeat with his stethoscope. He says that he canhear the slightest of sounds with it when Bud came over and barked at it, having Gil fly off. Molly laughs and says, "It's time for Bubble Guppies!"

Molly, Gil and Bubble Puppy were on their way to school, when Bubble puppy was beginning of fall behind and was sneezing a lot. He laid on the side of the way. Gil and Molly came back to find him laying there. Molly thinks that he is getting sick so, Gil carried him to school.

When they arrived, Gil tells Mr. Grouper that Bubble Puppy is sick. Mr. Grouper calls to see if a vet can go and check on Bubble Puppy. While they wait for the vet to come, the guppies talk about dogs and Gil sings A Puppy Is A Guppy's Best Friend.

Next, Goby goes to Deema's pet shop to find a dog to play fetch. It was obvious that every time the dogs hear the word "fetch", they would bark excitedly off-screen. Deema gives him two dogs to choose from, a dog with its tongue out and another that it's growling with its teeth. Goby asks help from the viewers to see which dog is ready to play. After picking the right dog, Deema tells Goby to have fun playing fetch, causing the other dogs to bark, they love playing fetch. Mr. Grouper comes and it's time for lunch. Nonny has the lunch joke: chicken poodle soup.

Gil trains the Little Fish how to be good doggies. He teaches them how to stay. Then another little fish comes and barks, causing the other little fish to bark, having Gil chasing after them. Next, Dr. Martin comes and checks on Bubble Puppy. She checks his ears and listens to his heart. Deema noticed the vet's stethoscope and said that her doctor uses it to check her heart too. Dr. Martin tells the guppies that animals and humans have the same parts, like a heart. Gil asks her what does she think what's wrong with Bubble Puupy. She reponds that he has a cold and mentions that dogs can get caught led just like people. She decides to take Bubble Puppy to the animal hospital just to make sure he'll feel better. Gil wanted wanted to find out how he could make Bubble Puppy feel better; Mr. Grouper gave him the idea of writing him a get well card. Alittle after Dr. Martin left with Bubble Puppy, Mr. Grouper checked on how the get well cards were coming along. Deema made her card shape into a bone and said that she hopes Bubble Puppy doesn't chew on it. Meanwhile, Gil was having a hard time thinking about what to write in his card. Mr. Grouper then takes the guppies outside.

Goby and Deema are veterinarians or vets. They help the fairytale animals in Storybook Town feel better. They help the giant's great dane dog Teeny to get a splinter off his paw and Goldielock's golden retriever Goldie by giving her water on a hot day. While they were helping these dogs, they were being chased by the Big Bad Wolf. Towards the end, Deema got a call from someone in the deep dark woods. However, the call was cut off. When they arrived, they run into the Big Bad Wolf and they leave. The Big Bad Wolf started crying and howling in tears in sadness and that's when Goby and Deema came back. They noticed that he was scratching a lot; he had fleas. So they gave him a bath and all the fleas went away. And they even howl. At the end, Teeeny, Goldy and the Big Bad Wolf were together with Goby and Deema. "And they all lived happily ever after."

Molly, Gil and Deema do The Dog Dance.

Mr. Grouper and the guppies go to the pet hospital to go check on Bubble Puppy. They go on until they find Bubble Puppy's cage but it was empty. Gil gets upset and he really wanted to give Bubble Puppy his card to make him feel better. He listens and reads out loud his card. When he was finished, the girls were touched; Nonny handed Deema a tissue. Gil said that if Bubble Puppy was there, he'd go "Arf arf!" Then, he hears a very familiar bark. Mr. Martin said that she has someone who's feeling a lot better. It was Bubble Puppy. Gil was really happy that he was doing better and he missed him. All the other guppies were also happy to see Bubble Puppy again. They leave the doggie hospital and recite the chorus of A Puppy Is A Guppy's Best Friend.

In the final scene, Molly tells the viewers that she's very happy that Bubble Puppy feels better. Gil says he do s too and shows Molly that he's training real dogs now and Bubble Puppy joins his class. He had Bud and Dottie already.