The Farmer, The Farmhand and the Robot Rabbit 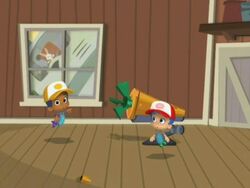 The Farmer, the Farmhand and the Robot Rabbit is the Storybook Segment from the episode: Have a Cow!

Outside, Oona tells the story of two farmers, Gil and Goby who were plucking their recently grown carrots. Goby tells Gil to keep an eye on the carrots, warning him to make sure that a bunny doesn't come to steal them. Suddenly, he spots a bunny, who steals the carrot! One more remains, but Gil is hurried as only one carrot remains. He then admits what happened as Goby returns and to take more precaution they build a bunny barricade in hopes of protecting the carrot. This proves useless though when they notice the ground shaking and see a giant robot rabbit! It's being controlled by the bunny! It then easily takes off the barricade and tries to grab the carrot. But Goby forces Gil to grab it and they go to hide in the farm. Realizing what they must do, they decide to build a giant robot carrot and when the robotic rabbit pulls up the farm and shakes it, the robot carrot falls apart! So Gil and Goby quickly reassemble the pieces. Upon seeing the carrot soon after, the bunny is instantly smitten and they shoot the carrot into the distance, to which the robot rabbit chases! With the carrot still safe, Goby pulls the carrot into three hunks and gives a piece to Gil and Oona, then one for himself as she concludes the story. 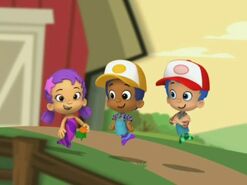 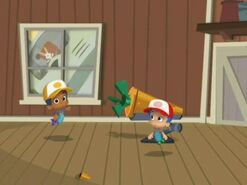 Add a photo to this gallery
Retrieved from "https://bubbleguppies.fandom.com/wiki/The_Farmer,_the_Farmhand_and_the_Robot_Rabbit?oldid=115752"
Community content is available under CC-BY-SA unless otherwise noted.