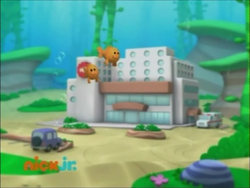 The Hospital is the location where Avi was taken to care for his hurt tail. The Hospital wasn't seen in the journey to school.

The Hospital's use in the series is a care facility for the residents of Bubbletucky. It was first seen in the episode: Call a Clambulance!. Avi was taken to his appointment inside a clambulance to the hospital, after a tricycle incident where he broke his tail. It later made a return in the episode: "Swimtastic Check-Up!", where the Mayor was taken against her will when she got a stomachache while training for a marathon.

Retrieved from "https://bubbleguppies.fandom.com/wiki/The_Hospital?oldid=129672"
Community content is available under CC-BY-SA unless otherwise noted.