Princess and the Graham Crackers 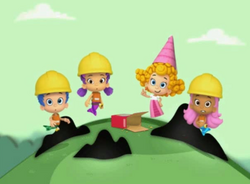 The Princess and the Graham Cracker Fortress is a storybook segment from the episode: Build Me a Building!

Deema has graham crackers and she wants the pesky Dragon to stay away from them, so she makes a fortess to keep them safe, but the dragon keeps burning it down and eating them.

The Bubble  guppies go outside to play. Deema decides she is a Princess as Goby tells a story about her and the royal construction crew. One day the princess was sitting on a hool with her favorite snack, she flees in surprise as thedragon eats all the graham crackers and flies away. Deema decides she'll need to keep her graham crackers safe by putting them away. The construction team decide they'll build her a fortress! But she wants it made out of paper. The build the fortress which Deema likes, then she offers a snack but the Dragon shows up again! Quickly they lock the Graham crackers inside and hide but the dragon simply burns down the fortress and flies away after eating the crackers! Deema then decides she wants her fortress made out of ice. The dragon ends up melting this fortress also, eats the crackers and fly away. The Princess then decide this time they need to pick the right type of material. She offers cheese, cardboard, then finally settles on Bricks after Molly brings it up. And so they build a fortress made out of bricks and place the Graham Crackers inside. This time the Dragon can't burn down the fortress. Eventually it makes him cry and they explain they built the fortress out of bricks so he can't burn it down. He really wants more graham crackers and Gil suggests that he just asks for more and Deema happily hands one over to everyone as they all live happily ever after 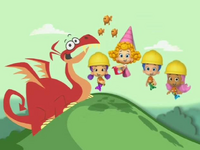 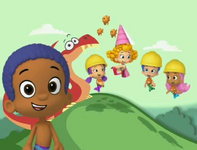 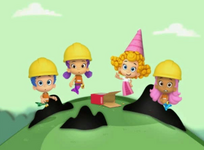 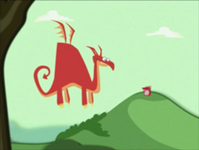 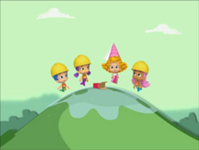 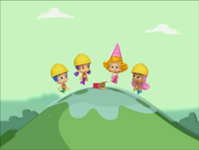 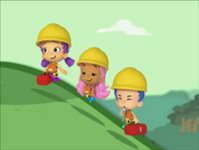 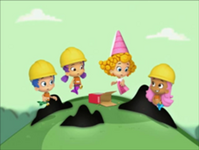 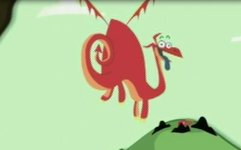 Add a photo to this gallery
Retrieved from "https://bubbleguppies.fandom.com/wiki/The_Princess_and_the_Graham_Cracker_Fortress?oldid=132430"
Community content is available under CC-BY-SA unless otherwise noted.